This evening I had a very pleasant surprise when I came out of the Publix foodstore to my bike. Lo and behold another dutch-style bicycle was parked at an adjacent pole where a purple mountainbike had been when I arrived 20 minutes prior. Turns out it was a family outing (as well as a beer run as evidenced by the brilliantly strapping a case of Sierra Nevada to the rack). We were all sheepishly glancing at each other and after mutually striking up conversation, turns out he had been in China and imported the bicycle here. The bicycle is an old-fashioned Phoenix, much like the Flying Pigeons, and apparently are getting harder to come by over there since electric bikes are the fashion now. It's a beautiful pristine bicycle with full chainguard, traditional rear stand that lifts the rear wheel up, and beautiful shiny rod brakes. He also had the white cotton tail painting on the rear fender and the double top bar so it's built for heavy utility hauling. His wife told me that because the bike doesn't have a skirtguard like mine does, her skirt once got caught up in it and she had to cut it off with scissors! Lucky it didn't cause an accident. So these features are indeed truly useful, they are not just decoration. She rides a beautiful beach cruiser and the son has his own stylish cruiser bike with white walls and red rims. They rode over from the historic El Cid neighborhood a mile or so south down the road. It's very wonderful that this area is at the very least family friendly for bicycling. The best part I noticed is that they weren't wearing helmets and thus not riding with fear. Way to go guys! 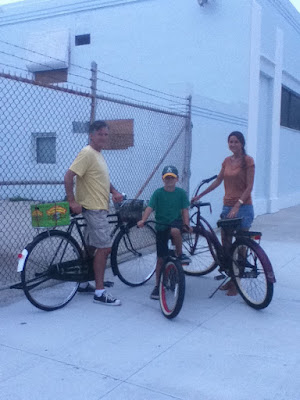