Now that the rain has subsided, the crazy winds gone, and a cool front passing through, I woke up early to try the commute to work that I have been so afraid of. Traffic downtown was almost nonexistent since it was 7am so it wasn't scary and pretty peaceful. One friendly guy on a bicycle rang his bell at me and smiled so that was pleasant. I found the mirror that I put on the left side to be pretty useful to see if there are any cars coming in the righthand-most lane (or right turn lane) in case I needed to get in the road. I had to veer into the road for a little bit since one part of the commute had no sidewalk. There were lots of lulls in traffic so I was safely able to cross the I-95 ramps and all of the major intersections. Cars gladly let me pass when they spotted me and I had no honks. We shall see if this will remain true on the ride home this afternoon when it's full on rush hour and they become pyschotic. The only hurdles were getting up and over the bridges over I-95 and the Turnpike. I felt so wimpy and so out of shape that I was heaving. The rest of the ride inbetween was mostly flat and I didn't want to exhaust myself and be discouraged so I calmy rode along on the 3rd speed. It took me 45 minutes to get to work, 30-35 min longer than usual but it was relaxing and I noticed stuff I have never noticed before. The people I passed generally were not very friendly. No smile, no wave, just indifference, but whatever. The only friendly bicyclists are downtown for some reason. Perhaps it's because it's a different demographic and income bracket, hate to say it. Though I don't know why this is an excuse to not be polite to people. There was not too much garbage on the sidewalk and the only obstacle was a man holding up a humongous advertising sign who had to manuever himself sideways to get out of the way.

What the commute on the new bike bridge over the Turnpike looks like: 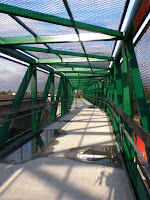 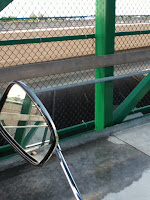 Now it's sitting in my cubicle being the center of attention for the office lol. 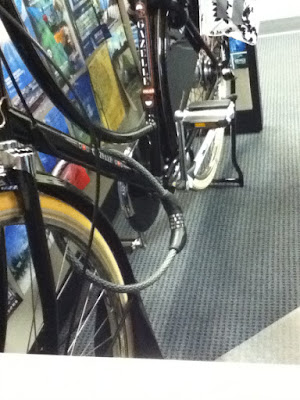 Bike in the cubicle, pretty much fits! Its locked up since some guys might be pranksters...

Ok so the ride home was not very nice. I became very cranky and aggravated by the end since I was riding right in rush hour traffic and on the left (north end) sidewalk where cars coming out of shops and plazas were not paying attention  to their right. I had to dismount the bike and walk around them whilst giving the death glare at them and proceeded on my way. I hit a pile of glass but don't think anything punctured. I was also ringing the bell at a guy who would not get out of the way because he thought one foot clearance was enough and I needed the slope incline of the sidewalk to get on. Then there was the issue of the part of Okeechobee with no sidewalk. Unable to plow the bike through the sandy area, I was forced to walk along the road going the opposite direction which is scary and annoying to drivers. Upon re-entry onto sidewalk, there was a lovely truck full of annoying political campaigners parked on it to which I again had to dismount and grumbled my aggravations at them. After waiting forever for the light to change...I got across Tamarind and made a left because I did not want to deal with traffic along Okeechobee turning into CityPlace. There, again with my amazement was a nice road blocker blocking the downward slope of the sidewalk. Again having to dismount. Finally got to my building and got into the garage where I think it was my bf's car (super loud and obnoxious) was loudly going off. Then inside, some lady was walking her dogs down the corridor and one dog was freaking out when seeing the bike. The lady couldnt control the dog and had to walk back down the corridor and wait for me to get inside my apartment.

Much better on the other side of the road, though there was a terrible headwind. I am again exhausted. Again could not figure out how to get around lack of sidewalk underneath Australian Ave and had to merge onto the road with aggravated SUVs passing too close and one really honked at me and scared me so much that I jolted and started swerving. That was NOT COOL. That was rather really dangerous and NOT appreciated. Tomorrow I am driving because I am going to the 2pm showing of West Side Story at the Kravis Center with the bf and Thursday there's a cold front passing through with showers so I will drive then as well. Friday is looking nice with a high of 70 so depending on the wind, I may bike Friday. 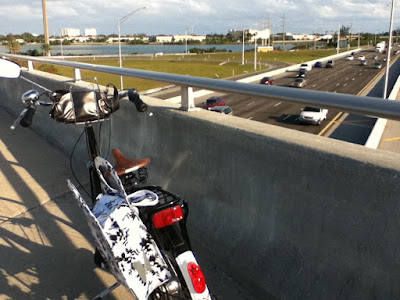